Here at Bubble Towers, we’re mad keen on good customer service and love to blog about our experiences in this arena. The thing is, customer service is often the only differentiator between you and your competition, so it’s vital to get it right.

A man walks into a bar… 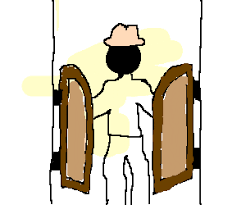 A man walks into a bar

Last week, I was in a pub (no surprise there then, I hear you say, but I was drinking lemonade, honest!) The pub was very quiet, with only one other person in at the time.

The door suddenly swung open in a way not too dissimilar to the old Western saloon door and in strode a big burly man donning a look of deep intent. “Tom Swailes” he bellowed, casting his glance across myself and the other customer. Since the barman was absent, he could only glance at us two … and neither of us felt the urge to respond (least of all me – was I dressed too masculine???).

Customer Service – How not to do it

“I have a delivery for Tom Swailes”.

Finally, we knew his purpose!

At this point, the bar manager said “Ah, OK. Do you know what it is please? I’m expecting two items for Tom”

“OK, well could it be a phone or a washing machine?” asked the bar manager

“Well it’s not a blxxdy phone”, he replied.

This guy was clearly in a bad mood for some reason, not breaking the intense look on his face in any way, shape or form. You can imagine his look when the bar manager pointed out that the washing machine needed to be delivered around the back of the pub, to one of the flats above the pub, i.e. upstairs!!!

In a huff, the delivery man said “I have a 22 foot lorry and will only deliver it to outside the door – I’m not taking it upstairs”.

At this, the bar manager called the pub owner, who happened to be the mother of Tom Swailes. She appeared and asked the delivery man if he would please deliver the item upstairs. It was, after all, the address to where the machine had been promised to be delivered, there were clouds above and it had been raining at times that morning. She explained that Tom wouldn’t be home for a good two hours or so and being almost 60 and alone, she was unable to take the machine upstairs on her own (anyone who’s ever tried moving a washing machine will tell you they’re very heavy!). He simply barked that he didn’t have the time to take it upstairs, as he turned to unload the machine from the lorry.

Your employees are the face of your company and maybe others too!

Now, ok – this guy may not have been from the company from where the machine was purchased – I believe he was with a separate delivery company. However, he represented that company – for all intents and purposes, he had been employed by the washing machine company to do a job on their behalf. He was just about as rude a man that I have encountered for quite some time, I can tell you!

As you can imagine, the pub owner was rather upset, so she went out to his wagon and took down his company details and phone number, along with his registration plate and told him she was contacting his boss, which she did. She then contacted the company from where the washing machine had been purchased. She told both of them exactly what had happened – I can’t say I know exactly what ensued, save for the apologies she received from both, but I don’t think the delivery man will be getting any bonus for that particular delivery! The thing is, he was then parked outside for a good 20 minutes after the delivery, seen on the phone the whole time, presumably explaining himself to his bosses … so despite being in a rush, how much more time did he waste by being so rude, I wonder? Being rude is less nice than being kind

The moral of the story…

Remember, customer service is everyone’s responsibility – whether you are in a meeting or exhibition, on the telephone, typing an email and even out of work hours. The impression you make of your company can either enhance or damage its reputation (and bad news travels much faster than good!)

This chap was not only representing his company, but also the washing machine company, so make sure that whoever represents your company knows what you expect of them. They must represent it correctly, as customer service can make or break a company. We can all have off days, but what you can’t allow yourself to do is allow those negative emotions to be conveyed to your customers. Without customers, after all, you would have no business (or in this instance, the delivery man no job).

As for the washing machine, Steve and another lad arrived 20 minutes or so later and they took it upstairs, thankfully before the rain started. He was a little out of breath, but 4 free pints from the pub owner as thanks soon brought a smile back to his little face…

Do You Want to Target Companies in the Beauty Industry?

Do You Want Targeted Business Lists?

Do You Want to Target UK Vets?